In everyday life, you can see examples of people with high IQ who are not able to achieve success in their work despite their superior academic abilities:

In all of these cases, you see individuals with superior IQ who are not successful because of problems related to their emotions: lack of emotional control, lack of motivation, lack of communication skills and lack of leadership skills.

There are many skills, unrelated to IQ, that are critical to our success. And all of these skills are associated with emotions. This realization led to the concept of EQ.

The concept of EQ developed in the 1990s. Before that time, the sole focus was on IQ. The concept of IQ was developed around 1900. It was in 1900 that Alfred Binet, one of the founding fathers of the IQ concept, began administering IQ tests to school children. In 1918, the US army started testing all their recruits for IQ. In the following decades, IQ became more and more popularized, so much so that it is now a household word.

From 1900 to 1990, the only focus was on IQ and not on EQ. Around 1990, people came to realize that IQ was not the only predictor of success. There were other important components influencing success in private life and business life that were not captured by IQ. However, there was no unified concept for other components that influenced success.

The first three components (verbal/linguistic, logical/mathematical, visual/spatial) are included in the traditional concept of IQ. The musical and bodily/kinesthetic components reflect a general skill level in important activities of music and sport. The last two components, interpersonal intelligence and intrapersonal intelligence, relate to emotions and are predecessors of the current definition of EQ.

By 1990, Salovey and Mayer coined the term "Emotional Intelligence". They formulated the Emotional Intelligence, EIQ, that was independent of IQ. However, EQ was not popular until Daniel Goleman published his bestselling book, Emotional Intelligence, in 1995. That book sparked public interest in the concept of EQ and led to an avalanche of articles and books. In the late 1990s, emotional intelligence became one of the hottest buzz-phrases in contemporary psychology. As of today, EQ has become recognized as the measurement of an important set of skills; the recognition of its importance in determining success is clear. 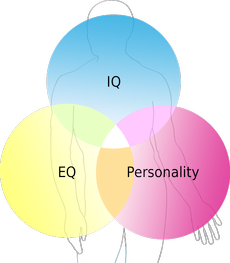 The IQ measures your intellectual skill level. It measures your ability to think logically, absorb information, transfer knowledge and solve problems. It is a very good predictor of success at school but not good at predicting success at work or in private life.

The EQ measures your emotional skill level. It measures your ability to understand your emotions, to control your emotional reactions, to motivate yourself, to understand social situations and to communicate well with others. It is a good predictor of success in your private life but not good, in itself, at predicting success at school or work. However, the combination of EQ and IQ is an excellent predictor of success at school, work and in private life.

No single competence defines your EQ. In fact, the EQ Test consists of five components:

What is emotional intelligence?

There are a lot of arguments about the definition of EI. Up to the present day, there are three main models of EI:

The Ability Based Model

Salovey and Mayer's conception of EI strives to define EI within the confines of the standard criteria for a new intelligence. Following their continuing research, their initial definition of EI was revised to: "The ability to perceive emotion, integrate emotion to facilitate thought, understand emotions, and to regulate emotions to promote personal growth".

The ability based model views emotions as useful sources of information that help one to make sense of and navigate the social environment. The model explains that individuals vary in their ability to process information of an emotional nature and in their ability to relate emotional processing to a wider cognition. This ability is seen to manifest itself in certain adaptive behaviors.

The model proposes that EI includes 4 types of abilities:

The EI model introduced by Daniel Goleman focuses on EI as a wide array of competencies and skills that drive managerial performance, measured by multi-rater assessment and self-assessment (Bradberry and Greaves, 2005). In "Working with Emotional Intelligence" (1998), Goleman explored the function of EI on the job, and claimed EI to be the strongest predictor of success in the workplace, with more recent confirmation of these findings on a worldwide sample seen in Bradberry and Greaves, "The Emotional Intelligence Quick Book" (2005).

Psychologist Reuven Bar-On (2006) developed one of the first measures of EI that used the term "Emotion Quotient". He defines emotional intelligence as being concerned with effectively understanding oneself and others, relating well to people, and adapting to and coping with the immediate surroundings to be more successful in dealing with environmental demands. Bar-On posits that EI develops over time and that it can be improved through training, programming, and therapy.

Bar-On hypothesizes that those individuals with higher than average EQ are in general more successful in meeting environmental demands and pressures. He also notes that a deficiency in EI can mean a lack of success and the existence of emotional problems. Problems in coping with one’s environment are thought, by Bar-On, to be especially common among those individuals lacking in the sub-scales of reality testing, problem solving, stress tolerance, and impulse control. In general, Bar-On considers emotional intelligence and cognitive intelligence to contribute equally to a person’s general intelligence, which then offers an indication of one’s potential to succeed in life.

Petrides proposed a conceptual distinction between the ability based model and a trait based model of EI. Trait EI refers to "a constellation of behavioral dispositions and self-perceptions concerning one’s ability to recognize, process, and utilize emotion-laden information". This definition of EI encompasses behavioral dispositions and self perceived abilities and is measured by self report, as opposed to the ability based model which refers to actual abilities as they express themselves in performance based measures. Trait EI should be investigated within a personality framework.

The trait EI model is general and subsumes the Goleman and Bar-On models discussed above. Petrides is a major critic of the ability-based model and the MSCEIT arguing that they are based on "psychometrically meaningless" scoring procedures.

The conceptualization of EI as a personality trait leads to a construct that lies outside the taxonomy of human cognitive ability. This is an important distinction in as much as it bears directly on the operationalization of the construct and the theories and hypotheses that are formulated about it.