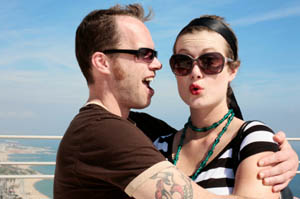 Occupation: Kasia is a Communications Manager, Damian is a Programmer

Normally, I am not into online dating. But about a year ago, two unfortunate events coincided. First my boyfriend left me, and three weeks later, I broke my leg in a car accident. As you can imagine, I was not in a very happy state. Since I had to spend a lot of time in bed and a wheelchair, I couldn’t really go out. A friend of mine showed me IQ Elite and told me that she was dating a really cute guy from the website. So I thought: “what the heck, why not try it as well; I certainly have the time”.

After I put up a profile, guys started writing to me, but I wasn’t yet convinced. After checking a couple of profiles myself, I wrote a quick message to the guys I liked the most. Pretty soon I found replies in my inbox. I sent messages back-and-forth with a few of them, but in the end, I found that I liked Damian the most. We ended up telling each other life-stories for probably more than a month, until Damian asked me for my telephone number. When he first called me, I told him that I only had 20 minutes to talk. So naturally, we talked for about three hours, and I ended up missing my doctor’s appointment!

When I first saw Damian about 4-5 phone calls later, I was a bit surprised, even though I recognized his voice and what he looked like. This made me realize just how important body language and charisma are in truly getting to know a person. We talked a lot about our common passion of salsa dancing via IQ Elite and on the telephone, so it was clear that we were going to dance on our first date. Since I was still recovering from my broken leg, I could only move very slowly. Nevertheless, I loved it, and Damian was a great dancer! He had the ability to make me feel very comfortable around him.

From then on, we basically did everything together. Well, not everything... For example, he likes cooking very much. And since he likes it so much, I just let him cook, while I relax and read a book. But of course, I help him eat the dishes!

We have now been engaged for two weeks, and I would never have agreed to it if I wasn't sure about Damian. I believe I have found “the one”. Unbelievable that a break up and a broken leg can lead to such a happy ending... Thanks IQ Elite!