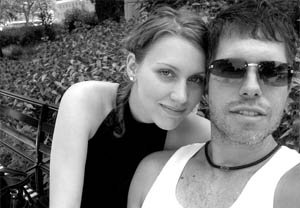 Occupation: Julietta is a teacher and Silvio is a graphic designer

Hi everyone,
My name is Julietta. I'm from Italy and I would like to share my story. I deeply fell in love for the first time, thanks to IQ Elite. I want to sincerely thank them.

I found the IQ Elite website completely by chance. In May 2010, I was doing some research about how people share their feelings, and if intelligence affects the way people express themselves, for my Masters' Philosophy thesis. After scouring the Internet, I found this website offering free IQ tests. "That looks interesting", I thought. "I should give it a try!" Still, I didn't really pay much attention to the dating aspect, since I was not looking for anyone at the time.

A few weeks later, I received an email from IQ Elite, suggesting a few men whose test results were similar to mine. I took a look at some of the profiles, and Silvio's instantly grabbed my attention. What especially attracted me to him was his bio. He was talking about his last holiday spent in Madrid, Spain. It was actually my plan to go there the summer after! So I plucked up the courage, and sent him a message. I told him that I really liked his profile, and that I especially took pleasure in reading his description of Madrid.

It took him a few days to reply, but from then on, we simply sent messages back-and-forth to get to know each other. About a month later we decided to meet, and we went to a traditional Spanish restaurant. The atmosphere, the food (and I must admit, the wine!) were amazing. It was my best first date ever! I really enjoyed my time with Silvio; it went by really fast. Afterwards, we saw each other every week for about two months. But after that, Silvio is the one who made the first move, and asked if I wanted to be with him… to be a couple! Now we have moved in together, and are going to Madrid for Valentine's! I'm excited, and I know it's going to be the best Valentine's Day ever! Thank you so much IQ Elite!